Bike to Work Day: By the Numbers

This past Friday brought sunny weather and Bike to Work Day, an annual celebration of biking throughout the DC region. But while some may forego a car, train, or bus to celebrate, Bike to Work Day is just like any other weekday for many. Biking is on the rise throughout DC and will likely become even more popular with the upcoming Metro maintenance. 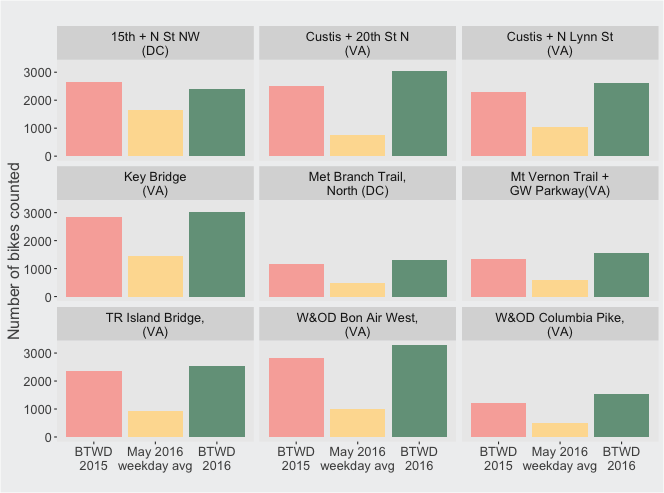 This year's Bike to Work Day was a success across the region. There were more bike rides than last year for nearly all bike count locations. After weeks of rain, a sunny day and Bike to Work Day festivities brought out many more cyclists than an average weekday this month. Most locations saw 250% more bike rides on Friday compared to the average May weekday. Virginia had the largest gains; the Custis Trail near 20th St N had four times as many bike rides. 15th St NW in DC was the only location to have fewer Bike to Work Day bike rides than last year, possibly due to construction 2 blocks south that narrowed the bike lane. It is also on of the most popular bike count locations. It had the most bikes on an average May weekday and received the smallest bump from Bike to Work Day.

As may be expected for Bike to Work Day, and most weekdays generally, the greatest number of bike rides occur during commuting hours. For most locations, the 8 a.m. to 9 a.m. is the high point of the day, with a slightly lower evening commute peak in the 5 o'clock hour. 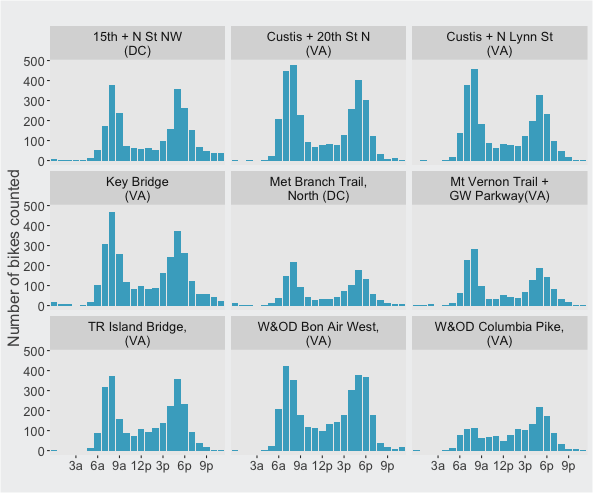 Interested in learning more about or making a DIY bike counter? Code for DC is currently building and testing out bike counters to install throughout the District!


Technical notes: Data are available at bikearlington.com and collected by DDOT and Arlington County. You can find complete code for this post on my github page.